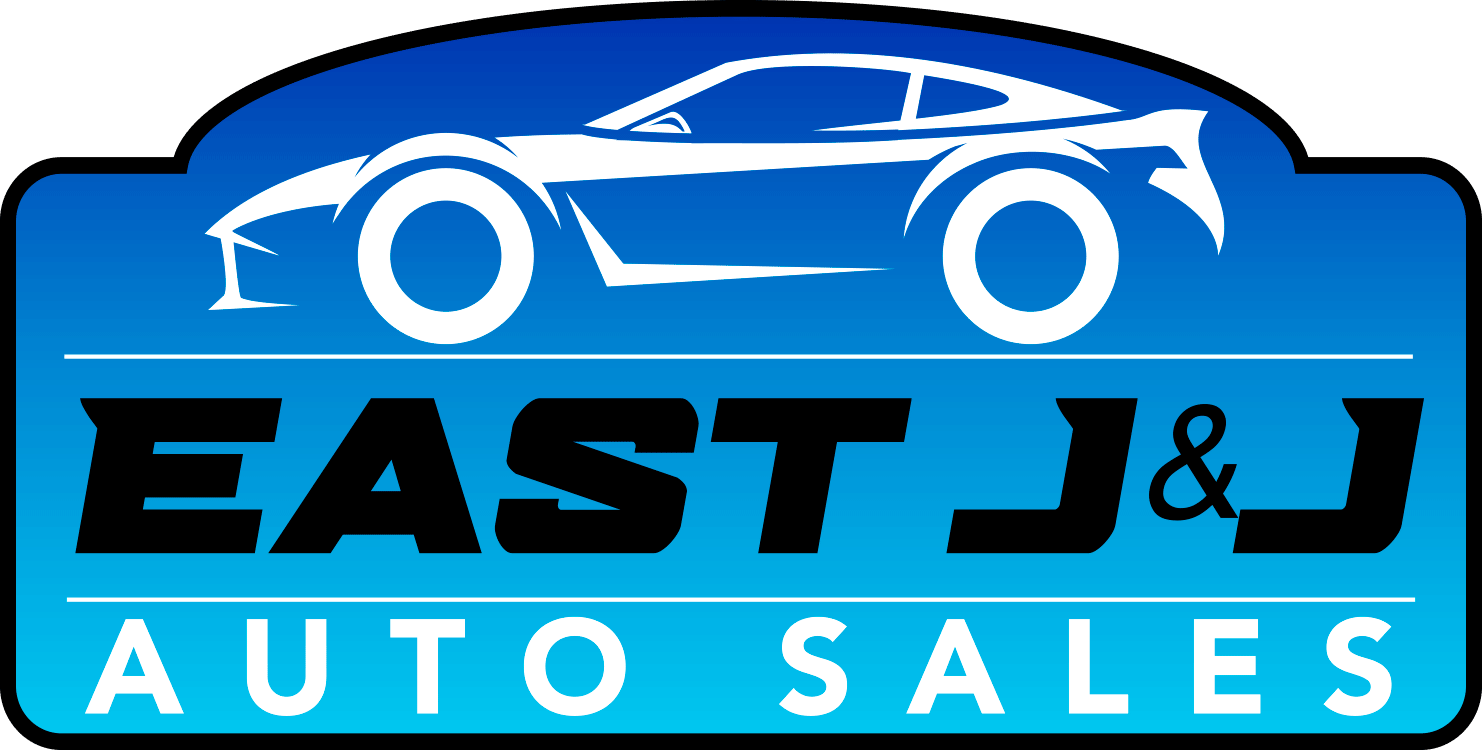 Request a quote for any maintenance or repair service.

HOW YOUR CAR’S AIR CONDITIONER WORKS 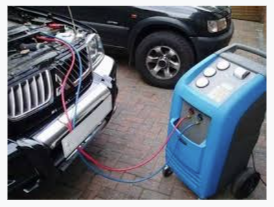 Servicing the air conditioning of a vehicle

In the refrigeration cycle, heat is transported from the passenger compartment to the environment. A refrigerator is an example of such a system, as it transports the heat out of the interior and into the ambient environment.
Circulating refrigerant gas vapor (which also carries the compressor lubricant oil across the system along with it) from the evaporator enters the gas compressor in the engine bay, usually an axial piston pump compressor, and is compressed to a higher pressure, resulting in a higher temperature as well. The hot, compressed refrigerant vapor is now at a temperature and pressure at which it can be condensed and is routed through a condenser, usually in front of the car’s radiator. Here the refrigerant is cooled by air flowing across the condenser coils (originating from the vehicle’s movement or from a fan, often the same fan of the cooling radiator if the condenser is mounted on it, automatically turned on when the vehicle is stationary or moving at low speeds) and condensed into a liquid. Thus, the circulating refrigerant rejects heat from the system and the heat is carried away by the air. 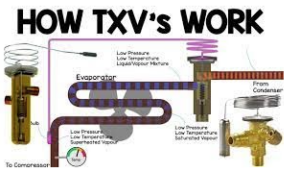 In a thermal expansion valve ( TXV) air conditioning system, the condensed and pressurized liquid refrigerant is next routed through the receiver-drier, that is, a one way desiccant and filter cartridge that both dehydrates the refrigerant and compressor lubricant oil mixture to remove any residual water content (which would become ice inside the expansion valve and therefore clog it) that the vacuum done prior to the charging process didn’t manage to remove from the system, and filters it to remove any solid particles carried by the mixture, in addition to acting as a storage vessel for any excess liquid refrigerant during low cooling demand periods, and then through the thermal expansion valve where it undergoes an abrupt reduction in pressure. That pressure reduction results in flash evaporation of a part of the liquid refrigerant, lowering its temperature. The cold refrigerant is then routed through the evaporator coil in the passenger compartment. When the expansion device is a simple fixed metering orifice, known as an orifice tube, the receiver-drier is instead located between the evaporator outlet and the compressor, and in this case it’s known as an accumulator. In such an air conditioning system, the accumulator also prevents liquid refrigerant from reaching the compressor during low cooling demand periods.

The air, often after being filtered by a cabin air filter, is blown by an adjustable speed electric powered centrifugal fan across the evaporator, causing the liquid part of the cold refrigerant mixture to evaporate as well, further lowering the temperature. The warm air is therefore cooled, and also deprived of any humidity (which condenses on the evaporator coils and is drained outside of the vehicle) in the process. It is then passed through a heater matrix, inside of which the engine’s coolant circulates, where it can be reheated to a certain degree or even a certain temperature selected by the user and then delivered inside the vehicle’s cabin through a set of adjustable vents. 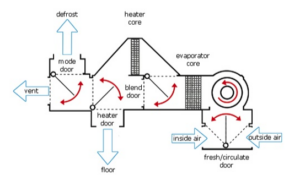 Another way of adjusting the desired air temperature, this time by working on the system’s cooling capacity, is precisely regulating the centrifugal fan speed so that only the strictly required volumetric flow rate of air is cooled by the evaporator. The user is also given the option to close the vehicle’s external air flaps, to achieve even faster and stronger cooling by recirculating the already cooled air inside the cabin to the evaporator. Finally, whenever the compressor is able to be commanded to operate in a reduced displacement, the vent temperature can also be controlled by acting upon the compressor’s displacement. Evaporator freeze over, which stops air from flowing through the evaporator fins, can be prevented in different ways. A temperature switch or a thermistor can control the evaporator coil surface temperature, and a pressure switch or sensing element can monitor the suction pressure (which is in relationship with the refrigerant’s evaporating temperature). Both control means can either act (either directly or by means of a control unit fed by their data) upon the compressor’s clutch engagement status or, in the case of a variable displacement compressor, its displacement; additionally, a secondary valve located on the suction side can throttle the refrigerant flow so that the evaporator’s outlet pressure doesn’t fall below a precise value during system operation.

The warmer the air that reaches the evaporator, the higher the pressure of the vapor mixture discharged from it and therefore the higher is the load placed on the compressor and therefore on the engine to keep the refrigerant flowing through the system. Compressor load is also proportional to the condensing temperature.

There are different methods for the repair and maintenance of the tube connections ensuring refrigeration cycles. Conventional methods like soldering or welding lead to time and damaging soiling issues. The Lokring connection which is based on compressed fittings is easy to use and thus more time efficient.

The six most common car A/C issues are:

In case of air conditioner failure, an auto repair technician will be able to run a proper diagnostic and recommend a fix or, at the last resort, a replacement of a broken component like a compressor. Auto air conditioner repair jobs are not really a good fit for a do-it-yourselfer. Your comfort will be well worth the money it will take to keep your car a/c in good, operating order.